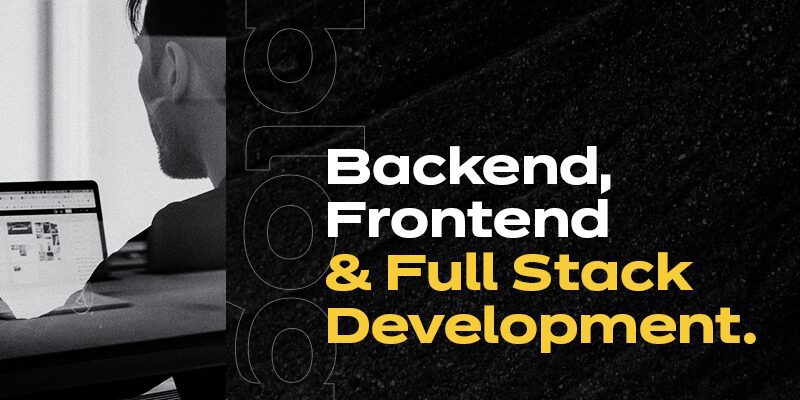 As a digital agency, website development is naturally both a key service offering and genuine passion of Anomaly’s. This intricate world can seem intimidating, but as is the case with all skills, if you’re genuinely interested in learning how to build and maintain websites and apps, you just have to start somewhere. Cracking the code may not be as hard as you might think.

In this blog post we’ll break down a common question newcomers have about this space: what is the difference between frontend development and backend development? Whether you’re looking to find out more about the kind of developer you need for a project, or perhaps the kind of developer you’d like to eventually become, understanding differences such as these can help you get started.

What is Frontend Development?

Frontend development refers to the creation and coding behind a website or app’s visual elements and features. Essentially, a frontend developer creates the side of the website that is seen by users, also known as the “client-side.” Think of these visual elements and features like the website’s “front,” as this is what the user sees upfront upon visiting a website or app.

These visual elements and features aren’t just there to be seen, though. Other focuses of frontend development are UX (user experience) and UI (user interface), and a frontend developer will usually work closely with these kinds of designers. This is because a frontend developer’s role is to not only create a website’s visual elements and features but to make sure that a user can use these things to interact with a platform and perform tasks there with ease. This type of development can therefore be seen as a marriage of aesthetics and utility.

Frontend development involves the creation and coding behind elements like buttons, navigation, graphics and content organisation. These developers work in coding languages such as HTML, CSS and Javascript and frameworks such as React, Angular and Vue.

What is Backend Development?

On the opposite end, backend development refers to the coding and creation involved in a website or app’s “unseen” side, also known as the “server-side.” This kind of development is therefore not dependent on aesthetics and is purely driven by function. As the “back,” this side is used to store and run programming that is integral to a platform’s function, but not necessary for the user to see, use or understand in order to navigate the platform.

Users indirectly interact with what backend developers work on, even though they can’t actually see it. Backend development is focused on components such as databases, scripting and website architecture. For example, if a user fills out a form on a website, this information will be stored and managed in a database on the server-side. These developers also monitor a platform’s functionalities and look for ways to improve the way the client-side works. Backend developers use coding languages like JavaScript, Ruby and Python, and frameworks such as Django, Laravel and Ruby on Rails.

What is Full-Stack Development?

Many developers become skilled in both front and backend development to become full-stack developers. This means they can develop both the client and server sides to websites and apps and are well-versed in both types of coding languages.

With full-stack development, you have the best of both worlds, as frontend and backend development team up in the website development process anyway. Together they create dynamic websites that allow users to interact with visually appealing platforms in all sorts of innovative ways. So having the ability to build both platform interfaces and databases can be ideal.

Has this helped your understanding of the different types of development? Reach out and let us know what you think, or if there are any other development topics you’d like to know more about.